We made new designs of pure car carriers with a slender hull and with streamlined superstructure. With good speed-power performance for reduction of power requirement. Capacities for 5000 - 8000 cars. The design includes large ramps, forward/bow and aft/stern, for car and truck loading, heavy load flats, heavy forklifts. LNG operated machinery.


Japanese/Korean cars are exported in large quantities to the Antwerp/Rotterdam area, whereof several cars are trans-shipped to the Baltic area ports. Return cargoes from Scandinavia consist of steel and forest products. We introduced, together with the exporters, a new roll on roll off system. Cars northbound the forest/steel products southbound. Cargoes type steel rolls, heavy paper rolls, wood pulp and sawn timber. This system became an enormous successful. Ports were rebuilt and equipped with special handling/loading machines for straight transport ways from warehouses direct to the vessels ramps.


This new roll on roll off system for Baltic ports, was introduced for the North Atlantic trade. Containers were to be loaded on weather deck and in part of the below deck areas. Together with the roro cargoes. We cooperated with Bromma for lifting and lashing systems. The Atlantic Container Line, AL, was created. We made the design for the first 2 generations type ACL vessels. The ACL group of Owners supported the Gothenburg Port to install one new port STS container crane, the very first container crane in Sweden. ACL consisted at the start of Wallenius Lines, Swedish American Line Group, Transatlantic Group, Holland America Line, Compagnie General Transatlantique (France) and Cunard UK Lines.


We supervised the construction of three new Jack up type Oil Rigs built in Dunkerque, France, bulit for VOLVO/STC. The rig construction is based on high tech steel qualities and special welding methods.We made the full site inspection. We had technical meetings with off shore companies/charterers in Aberdeen, Oslo and Paris. Also meetings with machinery and electrical subcontractors. We had a large technical team of experts, 12 men including welding and X-ray experts. We cooperated largely with Oddfjell in Bergen, Norway. All three rigs were successfully delivered. 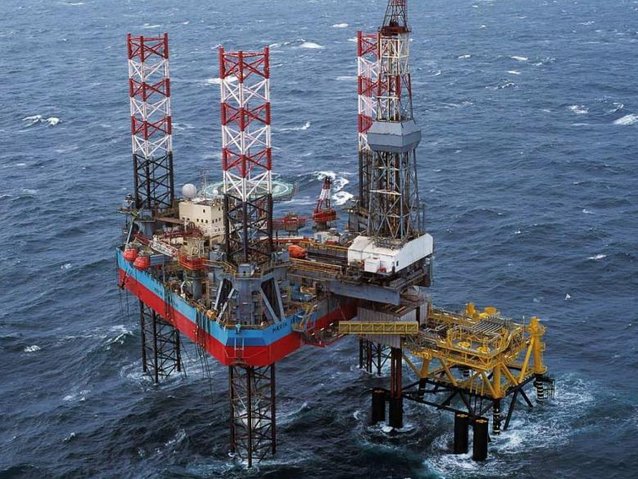 
STC and we initiated the designed and the building of six environment friendly new type product oil carriers of 48000 tdw. We handled the site supervision. These tankers were of high class, with high double bottom tank area for separate clean ballast water. All ballast and cargo tanks were sandblasted and coated with epoxy paints. Stainless steel cargo pumping was of deep well type. During this construction period, Mr. Lech Walesa, worked in the yard, he started the Solidarity Union. First in good climate, but this was followed by a hostile situation. The shipyard was totally closed for two years, 1982 - 1983. The closure caused disastrous weather damages to the half ready steel structures. Sandblasting and epoxy coating procedures had to be redone. A lot of welding had to be redone. Vessels were eventually put in good condition and were delivered to the Owners.


We designed and supervised a series of 8 new coastal vessels built for Swedish flag Owners.


We designed and supervised the building of series high class new type 35000 tdw oil product carriers in Trogir in Croatia (Yugoslavia at the time). With sandblasted ballast and cargo tanks, epoxy coated. Separate clean ballast water tanks. Steam turbine driven, high capacity cargo pumping of Swedish manufacture. The shipyard in Trogir had been closed down for several years. We assisted with the re-start of the yard production, introducing new manufacturing and quality assurance methods. We introduced new main sub-contractors from Scandinavia.


Missions for World Bank in Washington, USA, Egypt and Philippines


We have worked in two special, assigned mission projects for the World Bank in Washington. This was carried out in cooperation with ASG Transport Development AB. First mission. 1988. : "KIMA (Egypt) Fertilizer Restructuring Project, Report on Transportation Aspects 1988", which is an assessment of marine transportation from the Aswan High Dam Port on the river Nile or on railway or on trucks to Alexandria. Up streams with fuel oil and down streams with fertilizers. With shallow draft tug boats and barges, with handling alongside large vessels at the Alexandria Port. The work included oil spill prevention and cleaning systems.

Second mission. 1989. We investigated the present Shipping and Port situation in the large island area in the Philippines. Inter-Island shipping systems were investigated. There is a great shortage of ports. There is generally inadequate information available of ports and sailing routes and light houses. Both missions were reported to the World Bank in Washington.


We have together with ASG Development AB, Sweden, made a presentation of a RoRo concept with vessels and ports aimed at the Philippines and Indonesia. A new type shallow draft RoRo vessel with a bow ramp for port and beach landing. One 36 ton container crane for 40 ft. containers was included. The vessel was described as a multi carrier, being an alternative to costly harbor investments. Load capacity of 1000 ton. Sailing draft was 2,5 meters. The ramp was suitable for high axle loads, permitting trucks and heavy forklifts. The ramp was intended for port and beach landing. We also proposed a passenger ferry with large rescuing facilities with special, large floating rafts. The concept was presented at RoRo conference in Gothenburg.


Opera touring vessel. A new vessel design to be specially built for Opera and Theatre performances

Together with the Royal Opera in Stockholm, we were involved in the design of a fully new vessel concept, a vessel specially built for Opera and Theatre performances. In a touring system. This was initiated by the Stockholm Opera. All Opera Directors of all Scandinavian Opera Houses were involved and positive and participated in a presentation on board a vessel suitable for conversion. The Swedish Culture Minister /Marita Ulvskog/, laid down the project, very much to the disappointment of ministry personal, the Nordic Culture Association and the culture leaders and workers of the Swedish Opera. We made a plan of this new ship. This "Opera Vessel" was planned for a fully equipped touring of all the Baltic Sea and the North Sea. Accommodation was planned for the sailing crew, all artists, musicians, performers and for the operation of large restaurants for crew and visitors


We assisted Lexmar of USA, with the purchase of over one hundred Spanish, non-delivered new vessels, mostly laid up, new buildings, which were offered for sale in packages by the Spanish Government. We worked with the restoring of number vessels, some were not completed, and some were damaged. Lexmar wanted,with ouur assistance, to acquire a few of these yards. We worked with the development of one of these yards, in Vigo. This work with Spanish shipyards resulted in that Lexmar looked into restarting a big, closed down French shipyard, in La Ciotat near Marseilles. This yard had been closed down completely for several years as a result of EU financing actions. Yard installations were damaged. Steel production was not up-to-date with old type production. We made a fully new production plan introducing modern, high capacity steel panel line welding system. Important yard equipment from closed Swedish yards, was taken over by my company and was sent by ship to LaCiotat. We made a complete new production plan for the yard. The plan was made for new production of a series of VLCC tankers. We made the design together with Kockums. A complete design and complete specification. These tankers were designed with double hull. The plan was presented to the French Government. It was published in English and in French.


We have designed a new barge carrying system. The mother ship will be built with max dimensions for passage through the newly upgraded Panama Canal. It will be outfitted with diesel/LNG-gen sets for propulsion and domestic power. It will be loading two, four or six satellites. The satellite units will be simple barges, motorized self-propelled barges or feeder type vessels. Battery operation will be possible, also semi autonomous operation. The mother ship, may serve as a communication center, and may arrange loading of batteries of the barges. And may be a base for several service functions. It may be used for docking of naval vessels; it may be used for transportation of off shore units. The system will be very flexible. The barges, or the satellites, will be transported by the mother ship in a float on/float off barge carrying system. This new system was first presented in Shanghai in connection with the "Marintec China 2011. It has been presented at Chalmers Technical University and for the Chinese Technical University in Wuhan. The system is a very environment friendly shipping system.


The Car Carrier industry has been very successful. The designs of Mr. Bengt Lundquist were many and has served the Wallenius Lines well. This is one example of those. 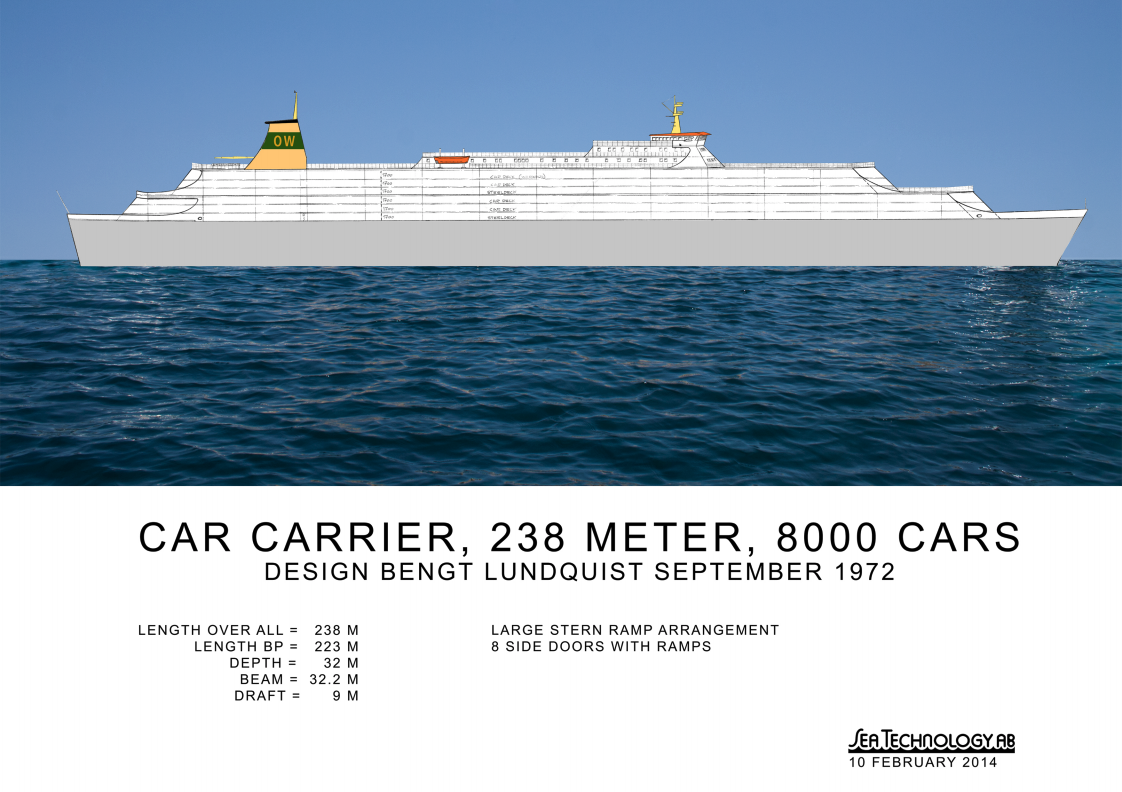